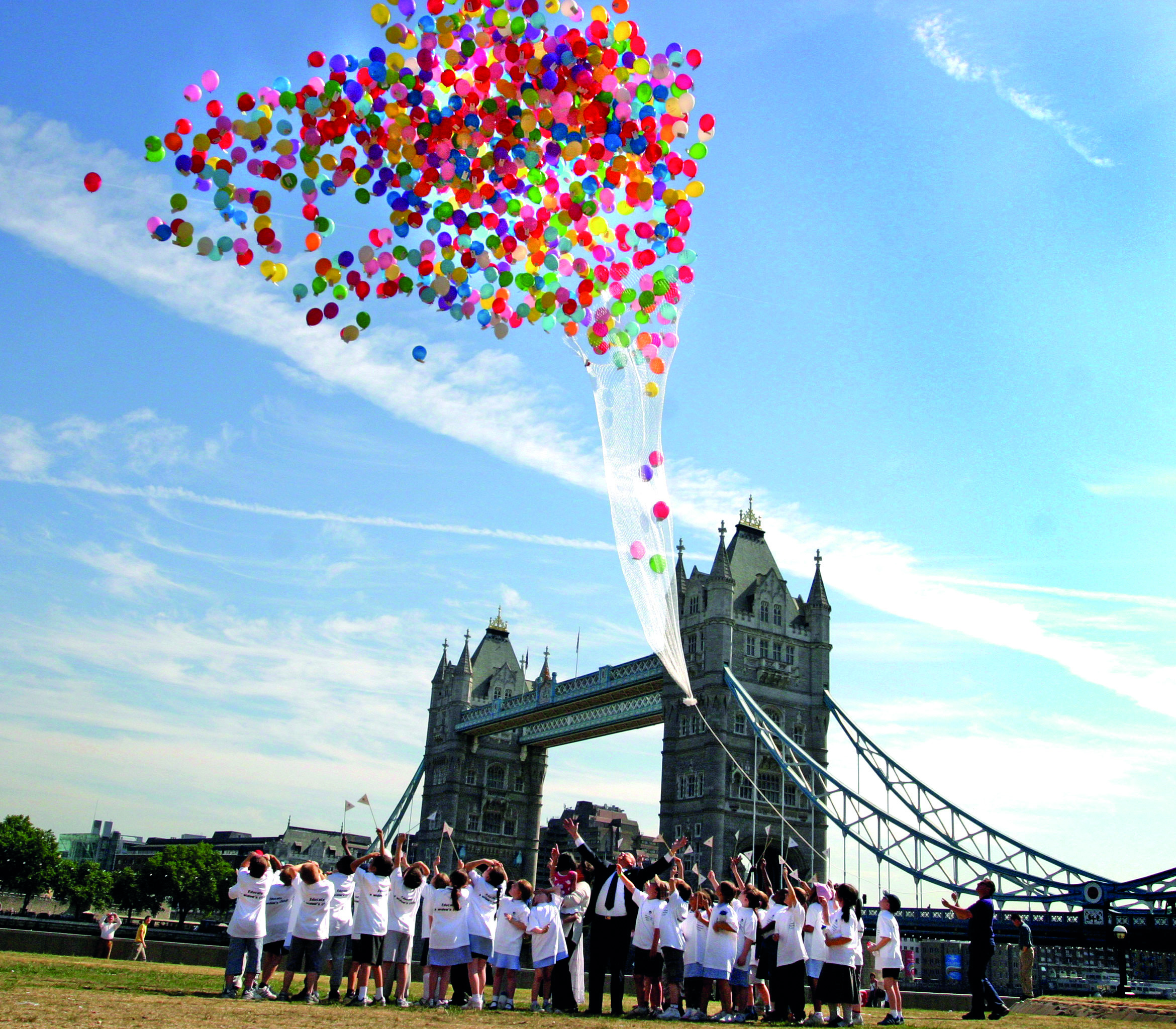 Having launched International Widows Day as a Loomba Foundation initiative, Raj Loomba set about plotting the course from Tower Bridge to United Nations Plaza. From the start, he was determined to persuade the United Nations to adopt International Widows Day as one of its own official days of action. That would provide a platform to engage all countries, and to create structures through which human rights campaigners, community organisations and people of goodwill could all collaborate.

How to get there? The strategy had to be ambitious. Connect with partners in other countries. Knock on the doors of the corridors of power. Persuade good people to become champions. International Widows Day events and activities were planned with two objectives in mind: to raise public awareness and to engage the international community.

On the second day of action on 23 June 2006, widows groups, public figures and political leaders were brought together by the Loomba Foundation to take part in an International Widows Conference at the Foreign & Commonwealth Office in London under the patronage of HRH The Prince of Wales. Chaired by the broadcaster Alastair Stewart, the conference heard moving contributions from widows’ representatives from Africa and Asia and was addressed by videolink by then US Senator Hillary Clinton and Sir Richard Branson.

An important early breakthrough was support from the Commonwealth, many of whose 53 member nations have deep-rooted cultural discrimination against widows in their communities. Keynote speaker Don McKinnon, Secretary-General of the Commonwealth, supported the Foundation’s call for UN recognition of lnternational Widows Day and described the battle for widows’ rights as “a silent war fuelled by culture and stigma”. Mr. McKinnon firmly linked the issue with that of global gender discrimination, pointing out that women are disproportionately represented in worldwide figures of poverty and illiteracy. “The privations and discrimination attaching to widowhood,” the Secretary-General pointed out, “add to the considerable disadvantage already faced by women in many countries.” He called for action to be taken on international, governmental and non-governmental levels.

Loomba Foundation President Cherie Blair also addressed the conference, calling for continued international action to relieve the plight of widows. Other keynote speakers included cabinet ministers from India and the UK, and John Lennon’s widow, Yoko Ono, who condemned the social taboo that shrouds the issue of widowhood all over the world.

Following the Conference, a Bollywood Concert was held in Trafalgar Square, hosted by the well-known Indian talk-show host Shekhar Suman and watched not only by the Conference delegates but by thousands of members of the public.

The culmination of this remarkable day was the release of balloons by Cherie Blair in Trafalgar Square and simultaneously by Delhi’s Chief Minister Sheila Dikshit in the capital of India. The events were widely publicised, including interviews on Sky and ITV, and coverage from BBC News, Times of India, The Sun, The Mirror, Hindustan Times, Daily Express, Channel 5, Asian Voice and many others.

In 2007 Raj Loomba opened an important new front in the campaign. Conscious that the invisibility of widows as an issue was due at least in part to the lack of reliable data – as noted in UN Women’s 2001 report about the “sin of omission” – the Loomba Foundation resolved to gather the hard evidence that is needed to underpin policy-making and legislation at national and international level.

As part of the Foundation’s Focus on Widows project, the Royal Institute of International Affairs at Chatham House in London agreed to undertake a global survey of awareness of and attitudes towards widowhood.

In July 2007, the Foundation set out its framework for research into widowhood.

To mark the third International Widows Day on 23 June 2007, balloons were simultaneously released in Nairobi, Dhaka and Colombo. In New Delhi, Raj Loomba hosted at a dinner to mark the occasion attended by the Minister for Women and Child Development, Renuka Chowdhury, and by 200 students of the Loomba Foundation’s education programme, accompanied by their widowed mothers. In London, Foundation President Cherie Blair launched a blimp airship over Trafalgar Square.

Signs that the campaign was making an impact emerged in 2008, with the announcement in June that Raj Loomba had been appointed a Commander in the Order of the British Empire (CBE) in the Queen’s Birthday Honours List, in recognition of his charitable and humanitarian work.

That same month, the Foundation became a UN-accredited NGO (Non-Governmental Organization) for the first time, associated with the UN Department of Public Information.

On 23 June 2008, to coincide with the fourth International Widows Day, the Loomba Foundation published the results of the survey conducted by Chatham House with worldpublicopinion.org (see Research).

2008’s International Widows Day was the most global yet, with events organised in seven countries on four continents. In London, a concert was held in Trafalgar Square with an international cast of entertainers. In Leicester, the first Asian woman Lord Mayor, Councillor Manjula Sood – a widow herself – marked International Widows Day by releasing multicoloured balloons at De Montfort University.

In Raj Loomba’s birthplace of Dhilwan, balloons were also released by the Deputy Commissioner of Kapurthala District at the Shri Jagiri Lal Memorial Senior Secondary Government School, while in Delhi, British High Commissioner Sir Richard Stagg hosted a lunch for Loomba Foundation beneficiaries – widows and their children – and released balloons to mark the day.

In Sri Lanka, 450 widows from Hambantota District attended an event organised by the Women’s Development Foundation and the Hambantota Youth Business Trust, marking the day by releasing a thousand balloons and planting a tree.

In New York, a lunch for international women of influence was hosted at the United Nations by Foundation adviser Elbrun Kimmelman.

Candles were lit and a tree was planted in a ceremony in Damascus, Syria, organised by the local partner of the Prince of Wales’ international charity Youth Business International, which was also involved in the celebrations in Nepal.

In Kenya, more than 100 widows involved in the Loomba Foundation Entrepreneurship Programme attended a ceremony with their children where balloons were released to mark the occasion.

Appeal to the UN

On the fifth International Widows Day on 23 June 2009, events took place in many countries including India, Nepal, Sri Lanka, Kenya and Rwanda. The international campaign had clearly been gathering steam and at an event in the House of Lords, Foundation President Cherie Blair issued a direct appeal to the United Nations to recognise the importance of the issue and adopt International Widows Day as an official day of action.

Raj Loomba reminded the audience of its importance in the global fight against poverty. “Poverty is the curse of mankind,” he said, “but when you put it in the context of widows and their children, it creates a new dimension in inhumanity.”

Weeks earlier, on 26 May, the preliminary findings of the study were revealed at a London briefing or diplomats representing 30 countries. On 22 June the book was presented to UN Secretary-General Ban Ki-Moon in New York, followed by a dinner attended by 27 UN Permanent Representatives including Mr Hardeep Singh Puri, the Permanent UN Representative for India, who was the guest of honour.

Containing unprecedented information about the scale of the problem, country by country, with detailed information about causes and consequences, this first ever worldwide study of widowhood was a powerful argument that this issue had been neglected by the international community for far too long.

Five years of hard-nosed campaigning, detailed research, and building support across the globe bore fruit when President Ondimba of Gabon proposed to the 65th General Assembly of the United Nations that it should grant official UN recognition of International Widows Day – a motion that was accepted unanimously.

It was a great achievement, but Raj Loomba had always been clear about one thing. International Widows Day is not an end in itself: it is a tool to help change the world. The real campaign could now begin in earnest.

On 23 June 2011, the first UN-recognised International Widows Day, Secretary-General Ban Ki-Moon issued a message to all Member States of the United Nations:

This first International Widows’ Day is an occasion to call attention to the many “firsts” that women must face when their husbands die. In addition to coping with grief, they may find themselves for the first time since marriage without any social safety net. Far too often, widows lack access to inheritance, land tenure, employment and even the means to survive.

In places where a widow’s status is linked to her husband, she may find herself suddenly shunned and isolated. Marriage — whether she desires it or not — may be the only way for a widow to regain her footing in society.

Of the approximately 245 million widows in our world, more than 115 million live in extreme poverty. In countries embroiled in conflicts, women are often widowed young and must bear the heavy burden of caring for their children amid fighting and displacement with no help or support.

Some of these widows are teenagers — or even younger. The death of their husbands can leave a terrible legacy these widows must endure throughout their remaining years.

All widows should be protected by the rights enshrined in the Convention on the Elimination of All Forms of Discrimination against Women and other international human rights treaties.

But in reality, interpretations of customary codes, as well as traditional mourning and burial rites, often deny widows virtually all of their universally recognised rights.

Despite the many difficulties widows face, many make valuable contributions to their countries and communities. Some take on leadership roles at the highest levels. Others work in their families, taking in orphans, serving as caregivers and reaching across lines of conflict to mend tears in the social fabric.

We must recognise the important contribution of widows, and we must ensure that they enjoy the rights and social protections they deserve.

Death is inevitable, but we can reduce the suffering that widows endure by raising their status and helping them in their hour of need. This will contribute to promoting the full and equal participation of all women in society. And that will bring us closer to ending poverty and promoting peace around the world.