I’m delighted to announce that Chris is embarking on another fundraising adventure with the aim of raising $450,000 to help widows in India. I had the chance to catch up with Chris as I wanted to ask some questions as well as establishing if he is human or if he is a machine, as it is difficult to tell! Before we delve into some questions, here is some background information on Chris including his past fundraising feats:

Chris is a partner at international law firm Herbert Smith Freehills and is chairman of the India practice. His past fundraising consists of the following: 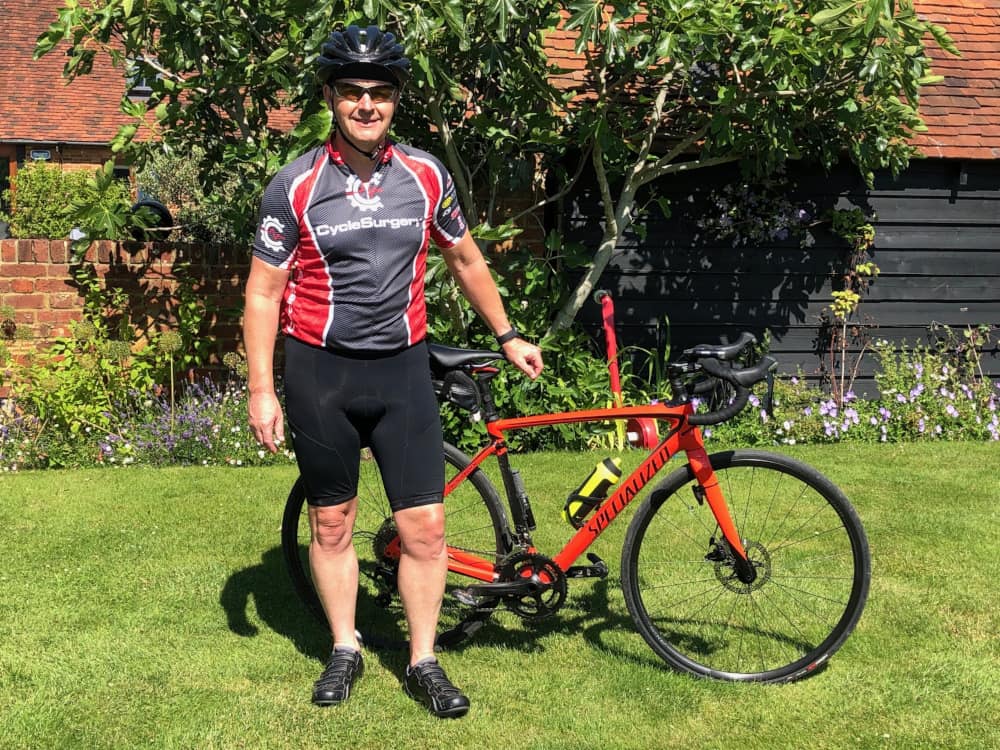 In February 2020 Chris will be cycling the length of India from Kanyakumari in the south to Srinagar, Kashmir in the north over 45 consecutive days starting on 3rd February 2020. He will cycle 4,500km in total and his target is to raise $450,000.

Here Chris talks in more detail about his upcoming challenge:

1) It's great to have you back fundraising for us again, thank you. What made you decide to take on another challenging fundraising venture? Why India and why cycling?

I could see 2020 coming up and that had a nice ring to it and I thought my last one was in 2015, that would have been five years ago, and I thought: Why not? India, because it’s my second home and I wanted to support widows and their children again, and, why cycling? I walked/ran last time, so I’ve done cycling before for the Loomba Foundation, when I did the London to Gibraltar cycle ride, and I thought, why not?

2) What drives you to take on such extreme challenges to fundraise? It's not easy by any means.

I’m just fortunate to be able to do them. I’m fit, I like exercise, so that’s one reason. Another reason is that I’ve gone very public with my alcoholism, so my addictive personality means that I tend to do things to excess, just as I did with drink, so why do one cycle if you can do 45 cycles and cover 4.5 thousand kilometres? And then the other area is I guess related to the relationship I had with my dad. He gave me very little affirmation and therefore, there’s part of me that gets some affirmation through doing these extreme things and being recognised for doing them. Perhaps not very attractive, but it’s the truth.

3) Thank you being so candid regarding your alcohol addiction. How are you coping with your addiction?

I joined Alcoholic Anonymous (AA) about 5 years ago and I have found that enormously helpful both in terms of having a sponsor, that is appointed through AA, and through following a 12 step programme. The reality is that you cope through abstinence, you cope a day at a time and you follow the 12 step programme as closely and as carefully as possible.

4) What is your training regime like at the moment? How regularly are you cycling and what distances are you covering?

I bought myself a Peloton bike, which I’m on fairly regularly, which is a sort of spin (stationary) bike, which I use at home. And then in this nice weather I like to get out as much as possible and I’m doing cycles around the countryside often doing between 35 and 50 kilometres at a time. 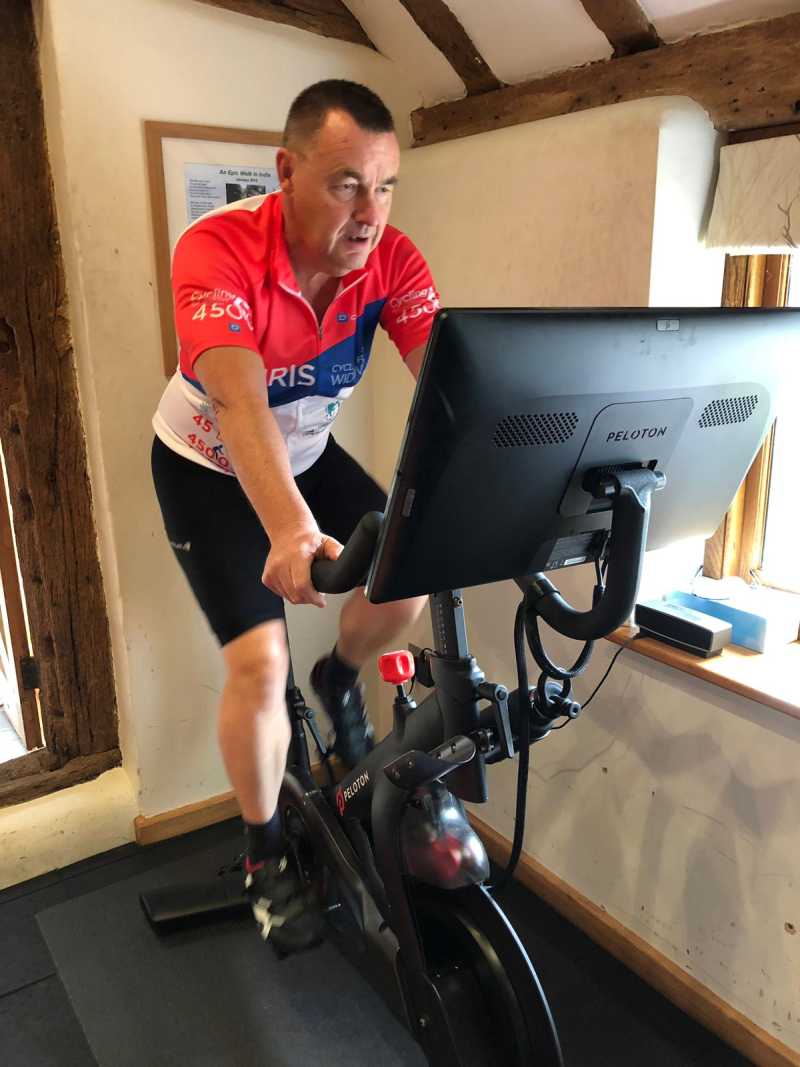 5) What bicycle and cycling equipment are you going to use in India?

In terms of my bike, it’s a Specialized bike, which is a US brand. It’s a road bike but with some give in it, so I hope that will mean it’ll be alright on the Indian roads. And we’ve got a great local bike shop in our local town called Tenterden, and they have worked out for me what spares and tools I’ll need to take with me, so I’m gonna pack up a box and take it along with me with my bike. They’ve also agreed to give me a course, a crash course – I hope not a crash course! - but a course in cycle repairs, so hopefully that will help as well. And, look I hope Atul from the Loomba Foundation Foundation will also be able to help as well as my physio. We’ll see.

6) What about dealing with flat tires and damaged equipment?

I’m going to bring lots of inner tubes and I’ll have some equipment as I mentioned previously, some additional equipment. And, look if the worst comes to the worst and my bike gets really badly damaged, I guess I’ll need to think about buying a bike in India, but I hope that my bike will be alright and I hope that the spare equipment and inner tubes, etc will be sufficient for the journey. 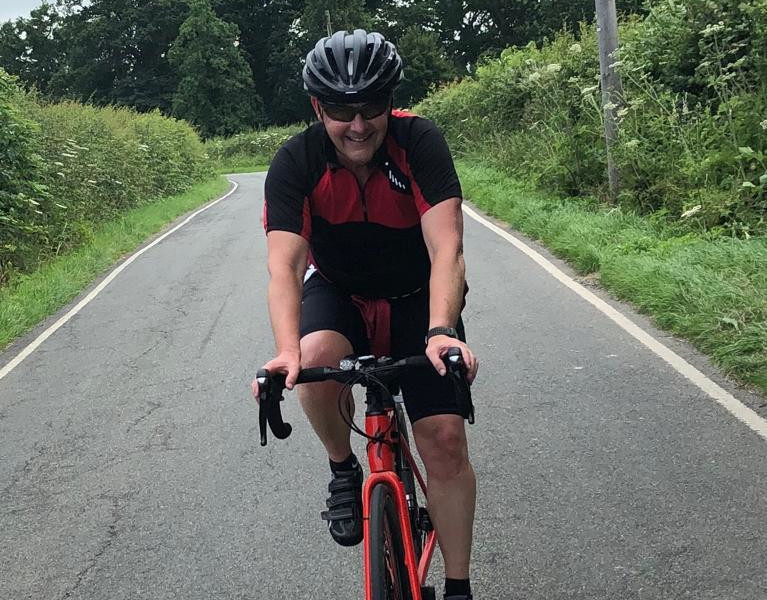 7) What about your diet? Have you made any changes to your current diet and what changes will you need to make in the run up to your first day of cycling in Feb 2020?

On my diet, I haven’t really made any major changes. I’ve got a massive weakness for stuff I shouldn’t be eating like chocolates, cakes, sweets generally & crisps so I’m trying to cut those out and to eat fairly healthily so that’s, I guess, the main change to my diet.

8) Your body is important of course. How do you intend to ensure your body recovers after each day of cycling and to stay injury free?

There are two answers to this question. One is that my training should hopefully prepare me for doing 100 km each day, and then the other really important aspect will be the physio, a super guy called Rahul who is one of the professional physios from the Hydrobadi Sunrisers IPL Team. He’s very kindly agreed to come along with me, and I hope that he is going to sort me out just as Sachin Mali did, who was the physio I had on my 30 marathons in 30 days. Having a good physio with me was critical and, interestingly, it was the one bit of advice I got from Ian Botham’s daughter, who’s his manager, and she said “if you do nothing else, take a physio with you”, so that’s what I’m doing.

9) What are your main concerns about completing the route as you will be cycling the entire length of the country? Will the terrain be tough in places? What about weather conditions?

My two worries are whether I’ll get ill, partly through exhaustion and partly through just eating something that doesn’t agree with me. And then I guess my biggest worry is the traffic and trying to stay safe on the roads.

10) When you walked 30 consecutive marathons over 30 days you had some really tough moments both physically and mentally. Do you recall what you went through and do you think that experience will help with this challenge?

I guess the main thing is that the mental part ended up being tougher than the physical part. I reckon the split was about 60/40 so 60% mental, 40% physical and I just need to remember that the mind will tell me to give up before my body tells me to give up. I remember the quote from my son kept on going through my head which was “the body can do much more than you think it can, dad” so I just need to remember that.

11) The Loomba Foundation mainly helps widows and their children in the developing world and in India in particular. What is it about this cause that resonates with you?

You know the cause of widows is something that through Lord Loomba’s descriptions and things that I have read like some of the challenges they face, and the fact that they are often thought to be the reason for their husband’s death. The way they are treated, the lack of support that they receive from their families and the community means that they seem to me to be a really important group of people that need some special support and so a combination of people who have already suffered one great loss to be suffering another one, and along with their children, meant that hopefully I can help both them and their children.

12) Have you seen any of the programmes run by the L.F. in relation to widows and their children first hand? What was your impression?

In terms of the work at the Loomba Foundation, I was lucky to go and visit, I think it was two schools in Delhi, after I raised money from cycling from London to Gibraltar, and I was able to see the children that were supported in those schools and (chuckles) I have to say that was fantastic, just to see the positive impact that the funds were having on their schooling. So that was the first time and then in relation to the money that we raised last time from the 30 marathons, it was all used to buy Singer sewing machines for widows in Varanasi, and I went along with Raj to visit a number of the widows in Varanasi and to be able to see, again, first hand, the excitement of them receiving something that would hopefully enable them to earn a living for themselves and for their children. I have to say Varanasi was also just incredibly fascinating, and seeing the Aarti on the river in the evenings at night was incredibly evocative. 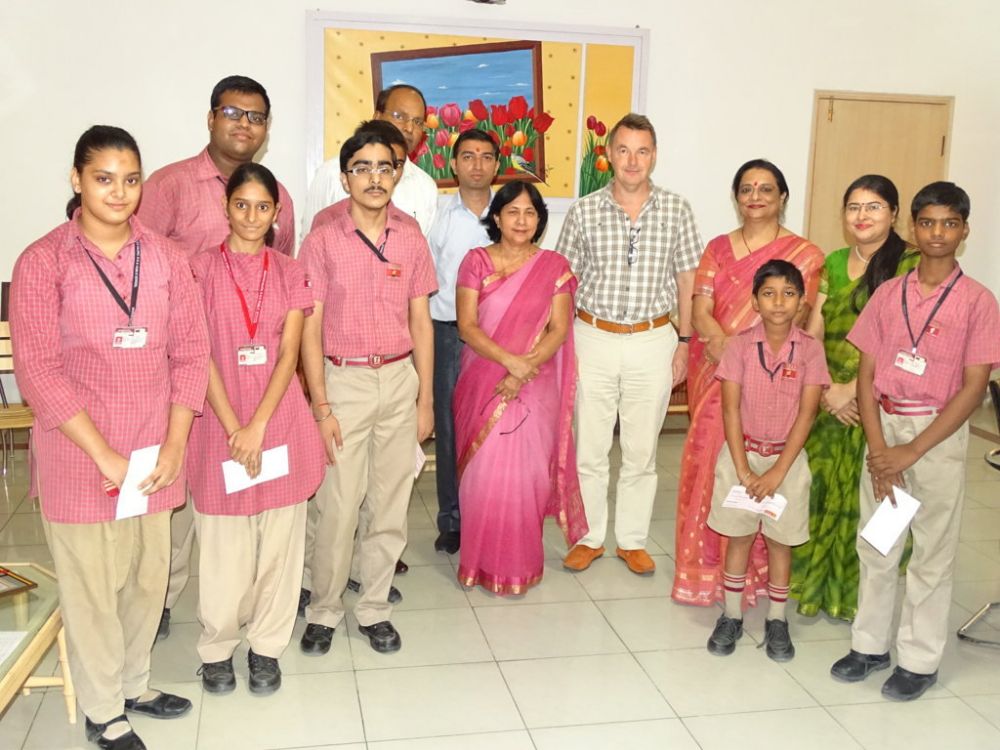 13) Last but not least, we are not convinced that you are human due to all the extreme challenges that you take on to raise money for the Loomba Foundation. Can you prove you are not a machine?

Yeah! Can I prove I’m not a machine? (laughs) well I can assure you that… I think perhaps the best way to describe me is sort of slow and dogged but if I put my mind to something, I try and ensure that I achieve it. And I think for the reasons that I explained previously, what drives me to do these extreme things, I think helps explain my approach to life. Whether it’s just doing something to excess and, whereas alcohol was doing something to excess in an unhelpful way, hopefully cycling a long way or walking a long way and raising money for widows and their children is using my excess in a positive way. And equally, whilst there’s some residual sadness about the relationship I had with my dad, perhaps that need for affirmation drives me on to do some positive stuff, so I’ll take that every day.

Chris starts his challenge on 3rd February 2020. Chris has a dedicated blog and mailing list for his fundraising so you can follow his progress. If you sign up for this mailing list you will receive a few updates prior to the start of the fundraising and then a daily blog that Chris will write for each of the 45 days.

Make a Donation to Help Widows in Jammu & Kashmir

All the funds that Chris raises will go towards a new programme that will launch next year and will help widows in Jammu & Kashmir. Please help Chris to reach his fundraising target by making a donation using one of the following websites.

If you are in India please visit this page:

If you are in the UK or elsewhere please go here: