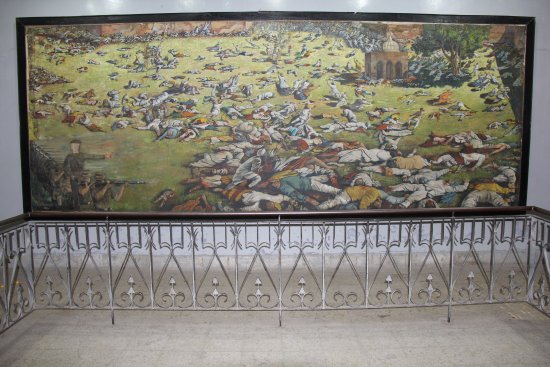 Painting at the Martyrs Gallery, Amritsar

The Jallianwala Bagh massacre, also known as the Amritsar massacre, took place in a public garden in Amritsar in the state of Punjab. On 13 April 1919, a crowd of local unarmed people were protesting in the area during a period of martial law. General Reginald Dyer from the British army saw these protests as defiance, so he ordered his troops to close all the exits of the park. With no warning to disperse, he led a group of 50 soldiers into the park who then proceeded to open fire at the crowd. The soldiers kept firing until they ran out of ammunition and the crowd included women as well as children. It was an absolute slaughter.

I (Lord Raj Loomba) come from Punjab and I fully understand the feeling not just in this state but all over India. I have visited Jallianwala Bagh and have seen the bullet holes for myself. I have heard countless stories about this incident including from my own grandmother.

This article (https://www.bbc.com/news/world-asia-india-21519719) from the BBC in 2013 features interviews with family members who were affected by the shooting and they make their feelings very clear.

The JBCCC was set up to commemorate the 100th anniversary, hold a debate, host an event at the House of Lords and to organise exhibitions in London, Birmingham and Manchester. The goal is to raise awareness of this unfortunate event and to request an apology from the British government. The members of the committee are Mr Balbir Singh Kakar (Chair), Mr Virendra Sharma MP, Ambassador Navtej Sarna and myself. The patrons are Dr Rajinder Singh Chada (Patron-in-Chief), Mr Manjit Singh GK, Padma Shri Vikramgit Singh Sahney & Mr Surinder Singh Manak.

I initiated a debate at the House of Lords (HoL) on Tuesday 19th February 2019. In the opening speech I talked about my relationship with Jallianwala Bagh. I have visited this park many times and I have seen the bullet holes in the walls. I have also seen the well from where all the bodies were extracted. I ended my speech with an appeal for an apology from the UK government.

To put this tragedy into context these are the words of Sir Winston Churchill describing the actions that took place that day:

“That is an episode which appears to me to be without precedent or parallel in the modern history of the British Empire. It is an event of an entirely different order from any of those tragical occurrences which take place when troops are brought into collision with the civil population. It is an extraordinary event, a monstrous event, an event which stands in singular and sinister isolation” (Official Report, Commons, 8/7/1920; col. 1707.)

For more information regarding the debate you can read our press release or the House of Lords transcript in full.

Will the British Government Apologise?

In the House of Lords debate I asked the British government to issue an apology. I have written to the prime minister and the foreign secretary, Jeremy Hunt, is reflecting on the situation. I sincerely hope they do issue an apology so we can have closure of this awful episode.

Commemorative Dinner at the House of Lords

The JBCCC held a commemorative dinner at the House of Lords on 13 April 2019 attended by the Jallianwala Bagh Centenary Commemoration Committee among 100 guests in total.

Exhibitions to Raise Awareness in the UK

The JBCCC has organised a number of exhibitions in order to raise awareness in London, Manchester and Birmingham:

Who/What is the Loomba Foundation?

I set up a charity/NGO called the Loomba Foundation in memory of my mother in 1997 after she became a widow in 1954 and was poorly treated. The way she was treated was appalling and stuck with me for many years so I decided to do something positive after she passed away. I set up the Loomba Foundation to help widows and their children. We have been involved in projects all over the world but our main focus is helping widows in India.

At the moment we are running a 5 year programme to help 30,000 widows across India. Please sign up to my mailing list to be kept informed of how we change the lives of widows.