The Loomba Foundation’s twentieth anniversary was celebrated at the Foundation’s Annual Gala Dinner at the Dorchester in London on International Widows Day, 23rd June 2017.

Presided over by the Foundation’s President, Mrs. Cherie Blair, the event was attended by His Excellency Shri Y.K. Sinha, High Commissioner for India as Chief Guest, Shri G.P. Hinduja, Co-Chairman of Hinduja Group  as Guest of Honour, and Special Guests including Mrs Jeannette Kagame, the First Lady of Rwanda, Shri Kalyan Banerjee, the Chairman of Rotary International Foundation and the British Minister of State for the Commonwealth, the Rt. Hon. Lord Ahmad. 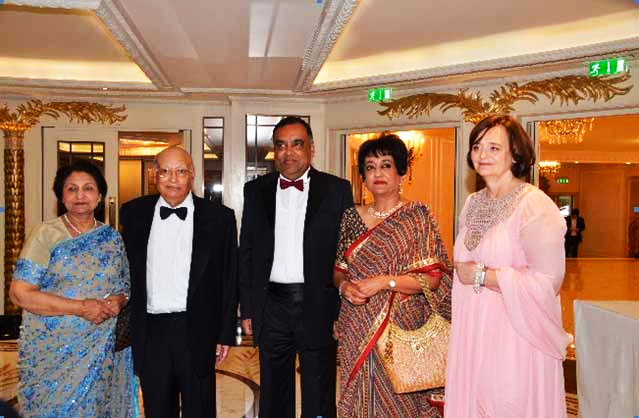 Attended by more than 300 high profile guests, including parliamentarians, trustees, patrons and supporters, the event was an opportunity to raise vital funds for the work of the Loomba Foundation as well as highlight the work the charity has done to educate children of poor widows and empower their mothers in India and around the world.

“Today more than ever,” she said, ”it is essential that our commitment to widows does not falter, and that, instead, it helps them remove the barriers that still prevent women from playing a leading role in economic development,” adding that “we are all uncomfortably aware that injustice has too often become a familiar experience for grieving widows across the world.”

At the Dinner, the Loomba Foundation signed an agreement with the Rotary India Literacy Mission to provide skills training to 30,000 impoverished widows – 1,000 widows in each of the 30 states in India – and fund the education of 2,000 children of poor widows.

The agreement was signed by Loomba Foundation President Mrs. Cherie Blair and Rotarian Shri Kalyan Banerjee on behalf of the Rotary International Foundation. The project will run over the next five years and cost approximately £2 million.

We sincerely thank Mr. Graham Tobbell, Mrs. Susan Tobbell and Brightsun Travels Ltd., who have each pledged to donate £20,000 a year over the next five years to support this project.