In January 2011, just a few weeks after the UN General Assembly unanimously designated 23 June as the annual International Widows Day, Raj Loomba took up his seat in the House of Lords and vowed to use that parliamentary platform in the United Kingdom to highlight human rights and in particular the plight of widows all over the world.

That year on 23 June, 57 years to the day since Shrimati Pushpa Wati Loomba had become a widow, the first official UN International Widows Day was marked with a message from UN Secretary-General Ban Ki-Moon to all UN Member States, stressing that addressing the plight of widows will bring us closer to ending poverty and promoting peace around the world.

A conference on widows at the UN headquarters that day was attended by 500 delegates drawn from many countries. Chaired by the wife of the Secretary-General, Mme Ban Soon-Taek, participants included Dr Michelle Bachelet, then the Executive Director of UN Women, Mme Sylvia Bongo Ondimba, the First Lady of Gabon, Loomba Foundation President Cherie Blair, and Lord Loomba.

Noting that International Widows Day had been initiated in 2005 by the Loomba Foundation, Dr Bachelet remarked that “attention to the world’s widows is long overdue. This first International Widows Day,” she continued, “is a vital first step in promoting the protection and respect for their rights, across all regions and cultures.” The plight of widows, Dr Bachelet noted, “highlights the need to empower women economically and strengthen their land, property and inheritance rights in all countries… on equal terms with men.”

The evening before, Yoko Ono had opened an exhibition of paintings about widowhood by the British Indian artist Reeta Sarkar in the United Nations building.

‘Widows Lining Up for Food in Vrindhaban’, by Reeta Sarkar, oil on canvas, 2011.

International Widows Day in 2012 saw major events in India, where the Foundation launched an empowerment programme for widows in Hyderabad, and in New York, which saw an awareness event in Central Park.

In London, three high profile events took place: an exhibition of Reeta Sarkar’s paintings at 10 Downing Street with a reception hosted by Deputy Prime Minister Nick Clegg and his wife Miriam Gonzáles Durántez, a celebrity walk across London Bridge, and a banquet at the Whitehall Banqueting House. 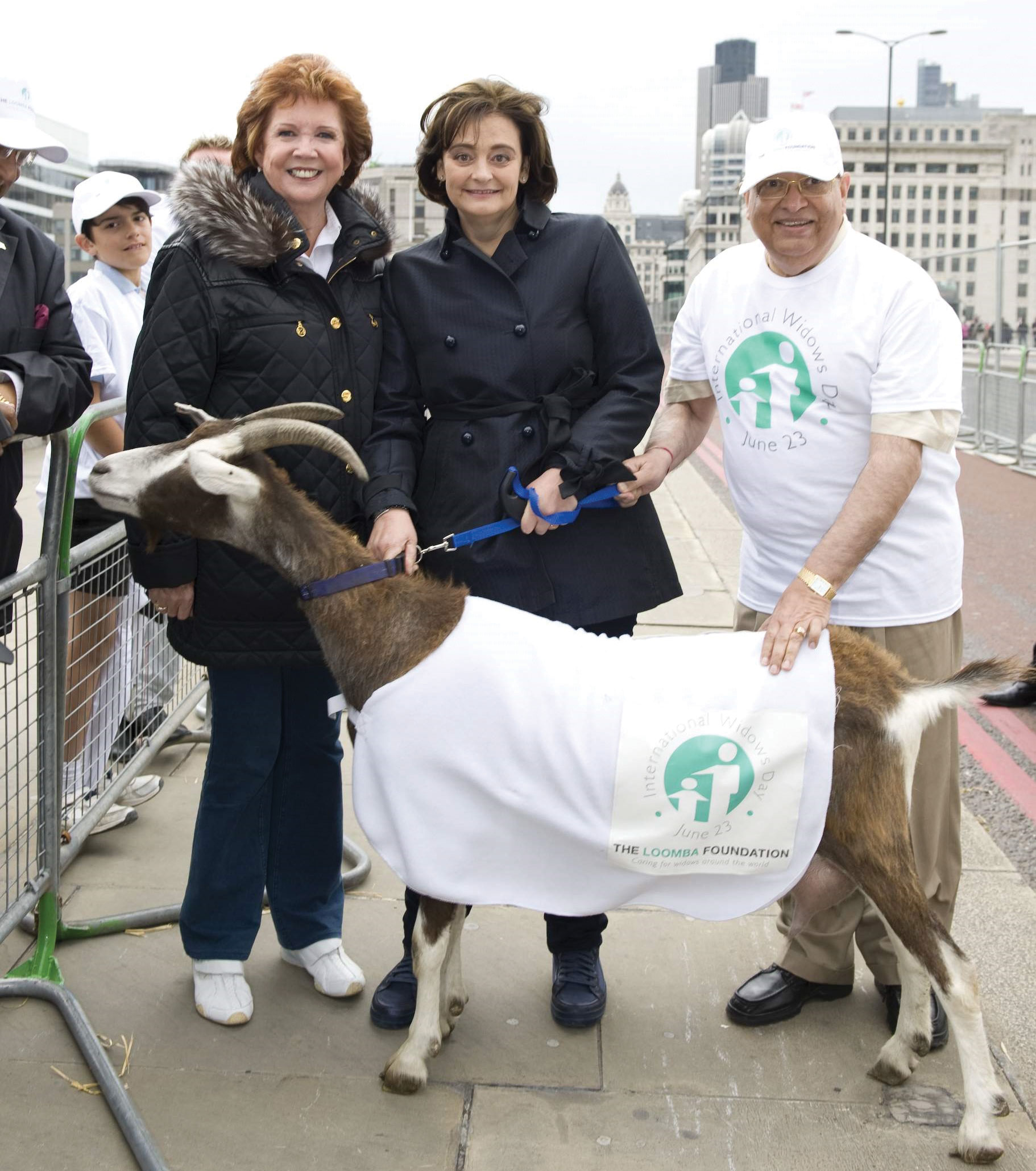 The London Bridge walk, which attracted a great deal of media attention, saw Cilla Black and Nancy Dell’Olio among other prominent women drive a herd of goats across the bridge – underlining the significance of the goat as an economic lifeline in many rural communities worst affected by global poverty.

In his message to Member States on the second UN International Widows Day, Secretary-General Ban Ki-Moon called for the removal of all “discriminatory laws, policies and practices that impede widows from enjoying the dignity and equality they deserve.” He expressed special concern about the plight of widows in situations of conflict and natural disasters, saying they should have the opportunity to participate in decisions on humanitarian relief and peacebuilding so they can help build a better future.

“On this International Widows Day, let us resolve to end all discrimination against the world’s widows, and to enable them to enjoy their full human rights. The benefits will extend to their children, communities and society as a whole.”

The following month, The Loomba Foundation was granted Special Consultative Status by the Economic and Social Council of the United Nations, in recognition of its specialist expertise.

Championing the rights of women

The number of countries and organisations involved in the campaign has grown steadily.

In 2013, events to mark International Widows Day took place in many countries throughout Asia and Africa. In London, more than 500 people took part in a five kilometre charity race in Hyde Park, and the following day, the Loomba Foundation hosted an International Widows Conference at the House of Lords with participants including Acting Head of UN Women Lakshmi Puri, human rights campaigner Bianca Jagger and UK International Development Minister Baroness Northover.

In recognition of his work raising awareness of the plight of widows around the world, UN Women used the occasion to invest Raj Loomba as its first ‘Women’s Rights Champion’.

Empowerment was the central theme of The Loomba Foundation’s International Widows Day dinner at the House of Lords in London on 23 June 2014, when the president of Lions Club International, Barry Palmer, announced its partnership with The Loomba Foundation to train and equip 2,000 widows to make a living in sewing and tailoring, to an audience including UK Deputy Prime Minister Nick Clegg and Indian High Commissioner Ranjan Mathai. 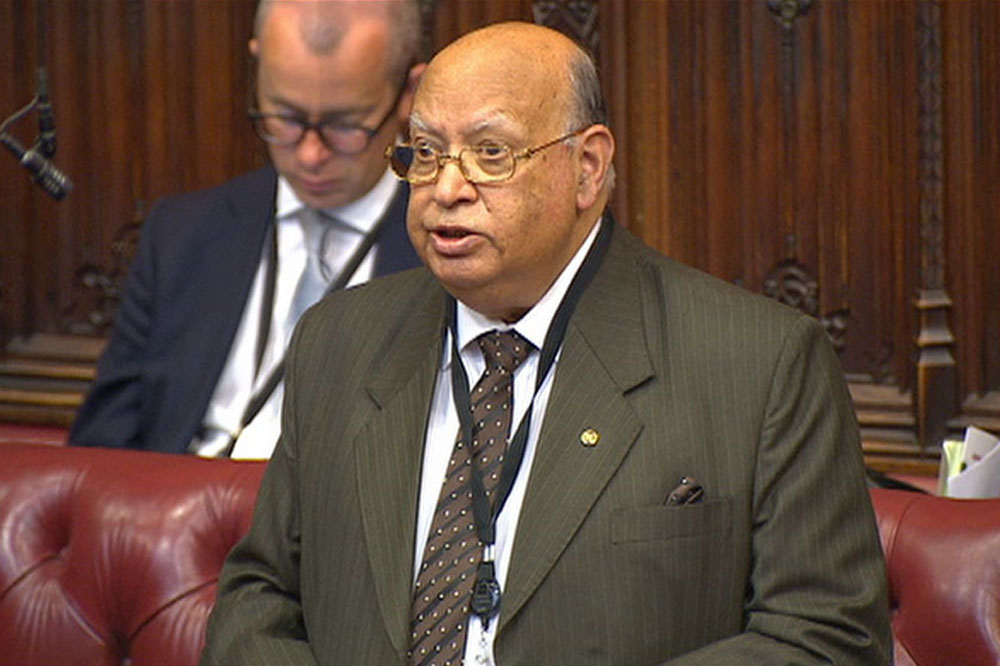 Lord Loomba speaking in a House of Lords debate in London.

A week later, on 30 June, Lord Loomba initiated a debate in the House of Lords highlighting the UN’s International Widows Day. He quoted UN Secretary-General Ban Ki-Moon’s statement that it is “our collective responsibility to safeguard the human rights and dignity of widows”. On behalf of the British Government, International Development Minister Baroness Northover pledged support for continued combined efforts “to achieve real gender equality and empowerment of women and girls, including widows”.

Another breakthrough came in 2015, ten years after the Loomba Foundation had launched International Widows Day and five years after its adoption by the United Nations. On International Widows Day in June, events included a 10th anniversary dinner in Westminster, a Widows Conference at the UN Information Centre in New Delhi and the launch of a skills training and empowerment programme for inmates of the Gurgaon and Faridabad Jails in Haryana.

Later that year, the Loomba Foundation launched a new, completely revised edition of its global research, the World Widows Report.

The World Widows Report was discussed with journalists at a briefing at the Royal Institute of International Affairs at Chatham House in London in December 2015 and presented to Secretary-General Ban Ki-Moon at the United Nations later that month. On 17 March 2016, it was launched in New York at a parallel event during the 60th anniversary meeting of the UN Commission on the Status of Women with a warning that the newly-adopted Sustainable Development Goals will not be achieved unless urgent action is taken on the issue of deprivation faced by widows.

“Widowhood is a hidden calamity,” Lord Loomba pointed out. “When an earthquake, tsunami or any other natural calamity happens, the world takes notice. We can measure the number of people who are killed and the financial consequences. The calamity of widowhood is far greater, affecting almost one seventh of humanity, yet it is largely invisible. This report is an attempt to put that right.” 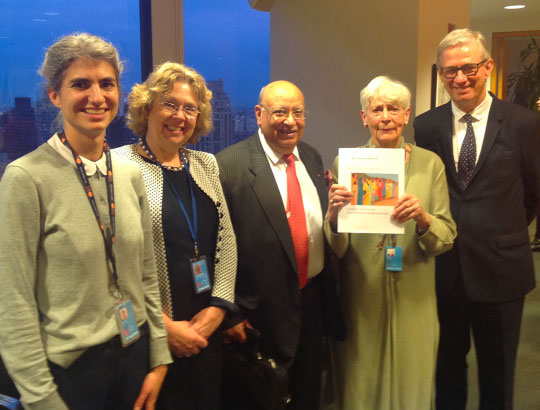 The point was picked up by Secretary-General Ban Ki-Moon in his message on International Widows Day 2016. “The 2030 Sustainable Development Agenda with its pledge to leave no one behind has a particular resonance for widows, who are among the most marginalised and isolated,” he said. “On International Widows’ Day, let us pledge to make widows more visible in our societies, and to support them in living productive, equal and fulfilling lives.”

The World Widows Report, in a comprehensive review carried out by the Economic and Social Research Council-funded Centre for Population Change at Southampton University, was described as “an important contribution to academic scholarship on the subject of Widows”. The Report is beginning to have an impact on the debate, as witnessed by citation in documents such as the 2017 Human Rights Watch Report on widows in Zimbabwe, and the underpinning of the National Geographic’s prominent feature on widows in its February 2017 edition. 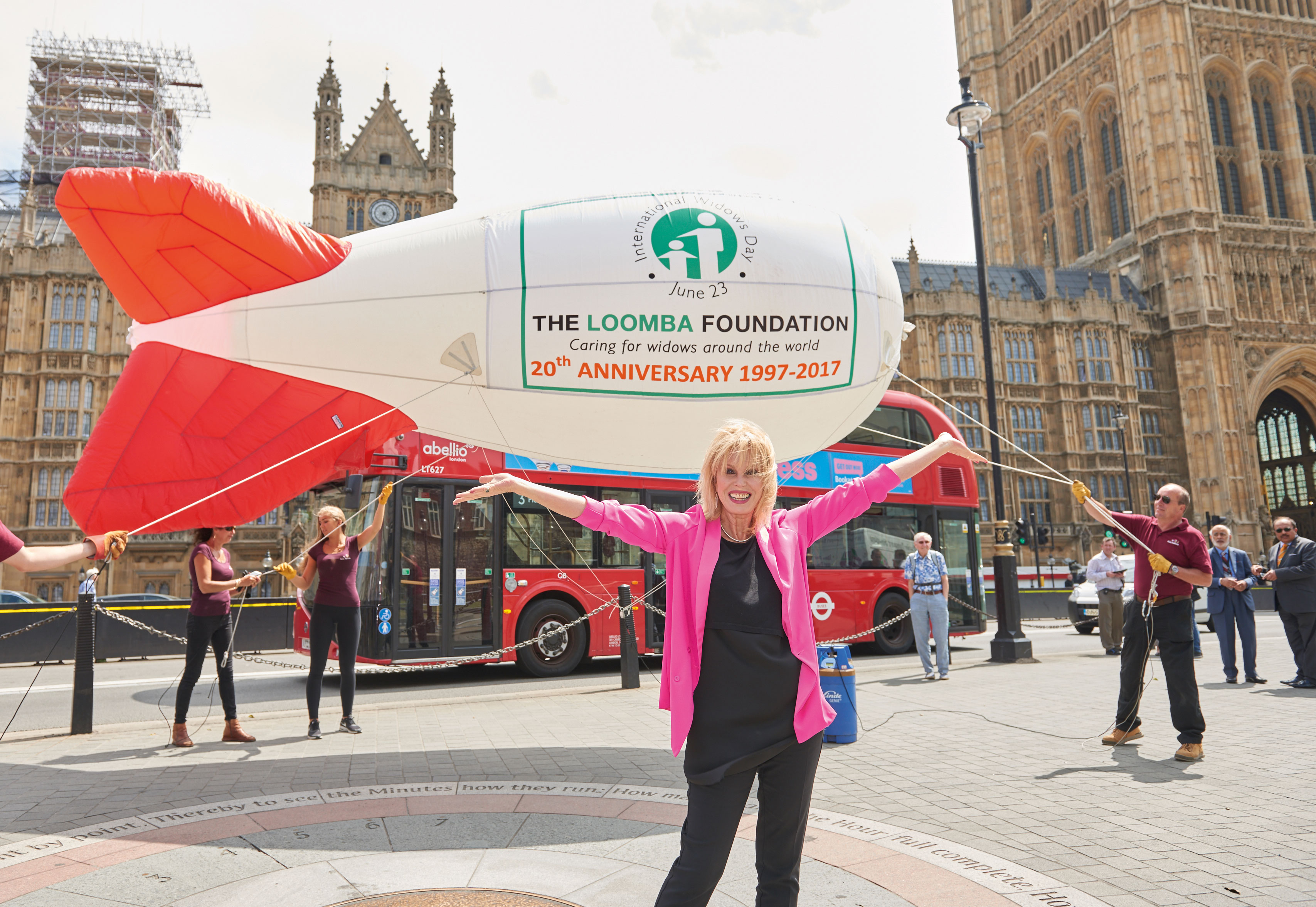 Joanna Lumley launches the Loomba blimp over the Palace of Westminster, 23 June 2017.

The actress Joanna Lumley, a long-standing patron and supporter of the Loomba Foundation, launched an airship over the Houses of Parliament on International Widows Day 2017 to raise awareness of the cause, and at a dinner that evening, Raj Loomba paid tribute to retiring Secretary-General Ban Ki-Moon, thanking him for his support. He also expressed thanks to successive governments of the UK and India, in particular Indian Prime Minister Narendra Modi, who had launched the Foundation’s empowerment programme for widows in Varanasi that year.

A social movement for change

On 23 June 2018, the eighth official UN International Widows Day, powerful support was expressed by two leading Indian politicians in New Delhi. Speaking at an event organised by the Loomba Foundation to mark the day, the Union Minister for Law and Justice, Ravi Shankar Prasad, said that his ministry would take “decisive intervention in favour of the rights of widows” and emphasised this must be part of a wider social movement. “Without a change in attitude we cannot change much,” he pointed out. 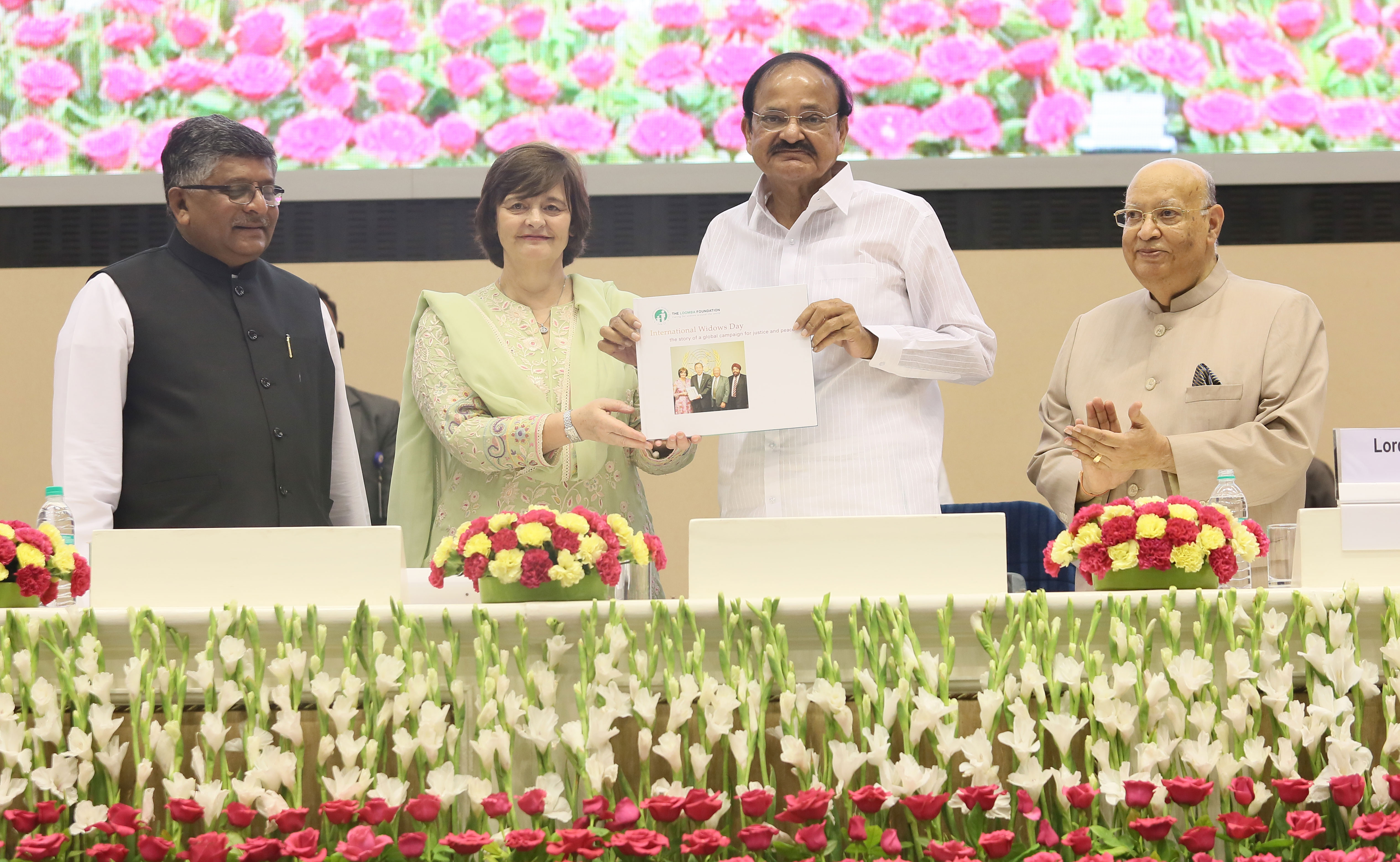 The country’s Vice-President, Mr Venkaiah Nadu, also called for a change in mindset. “We as a society need to reflect on the social attitudes towards widows,” Mr Nadu said, “and how the stigma, humiliation and isolation attached to widowhood can be overcome. It is inter-twined with gender discrimination, which runs as an unfortunate undercurrent in contemporary Indian society.

“Girls and women need to be provided equal and equitable access to good education and livelihood opportunities,” he added. “Our concept of New India encompasses economically emancipated women. If that vision is realised, many of the social ills like atrocities on women and neglect of widows can become a thing of the past”.

The combination of awareness events and evidence gathered by research has, since the first UN-recognised International Widows Day in 2011, produced much greater coverage of events and widows’ issues by media organisations including Reuters, the BBC, the New York Times, CNN, National Geographic, The Huffington Post and others, and generated a growing awareness among governments.

Much progress has been achieved. The goal, however, has not yet been reached, so the Loomba Foundation will continue its efforts to raise awareness and develop the foundations for evidence-based policy so that one day, the widespread and endemic discrimination against widows will be eradicated from our world.