As long ago as 2001, UN Women said that “there is no group more affected by the sin of omission than widows. They are painfully absent from the statistics of many developing countries, and they are rarely mentioned in the multitude of reports on women’s poverty, development, health or human rights.”

Eradicating discrimination against widows requires action and leadership by governments as well as fundamental change in deep-rooted cultures and traditions. Neither of these are possible without deep and detailed knowledge of the problem.

This is why, when the Loomba Foundation embarked on its International Widows Day initiative, it simultaneously began a research programme to address this omission and to uncover the scale of discrimination against widows, its many forms, its roots and its impact on the economy around the world.

In July 2007, the Foundation set out its framework for research into widowhood:

In 2008, the Royal Institute for International Affairs at Chatham House in London and the WorldPublicOpinion.org international survey organisation managed by the Program for Public Consultation in Washington, D.C., were commissioned by the Loomba Foundation to build up a picture of international attitudes towards widowhood.

The results were revealing. Of 18 countries polled, 12 saw at least 40% of respondents reporting some or a great deal of widows’ disadvantage. More than six out of ten respondents globally said that widows received worse treatment than women generally. Indicating through the geographic spread of its responses that widows’ deprivation is not exclusive to any one culture, society or region, the survey led the Loomba Foundation to undertake a far broader and more ambitious project that had never previously been attempted: to build up a global picture of existing knowledge about the treatment of widows.

The first manifestation of this work was the Global Widows Study, published in 2010 as an addendum to the book Invisible Forgotten Sufferers by Vijay Dutt. 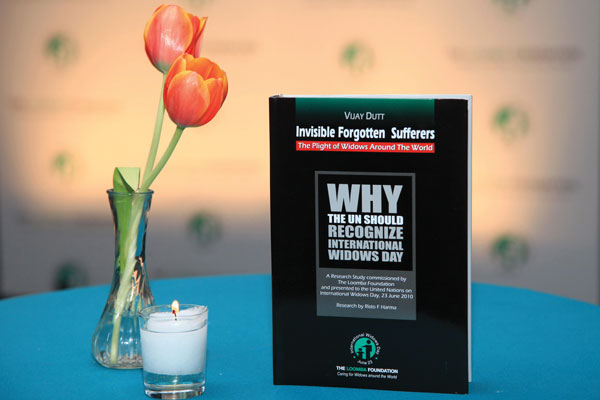 The study examined disparate existing data sources to establish widow numbers in different regions of the world, their relative proportion in the female population, principal causes and drivers of widowhood underlying these numbers, traditions and customs that lead to abuse, and the social and economic impact of discrimination. The evidence of the global nature and scale of the problem that was revealed in the study was a factor in the UN’s adoption of International Widows Day on 22 December 2010.

The research continued on a larger scale, leading to the publication in 2016 of the first edition of the World Widows Report, which provides a unique complete, country by country, regional and global quantitative breakdown of data about widows. It brings together data from national and international census archives with disparate and inaccessible material from unusual and hard to find sources, including in-depth studies in academic journals and reports by international development organisations. The 2016 edition of the World Widows Report is available in full on this website, and also as a download document or printed report.

To support wider global research into this important area, the information compiled in the World Widows Report is also available on this website as machine-readable data. Researchers are encouraged to inform the Loomba Foundation and, where appropriate, submit their work for publication, or potential inclusion in future editions of the World Widows Report.

Contact the Loomba Foundation here.
Explore the World Widows Report using the menus at the top or on the left.