This section provides quantitative data on the status of widows globally. The World Widows Report is currently the only source presenting comprehensive data on widows, country by country and worldwide.

The data is taken from the UN database (UN Data, UN Statistics Division) and from individual country census and population survey data collected for the Report.

Number of widows and poverty 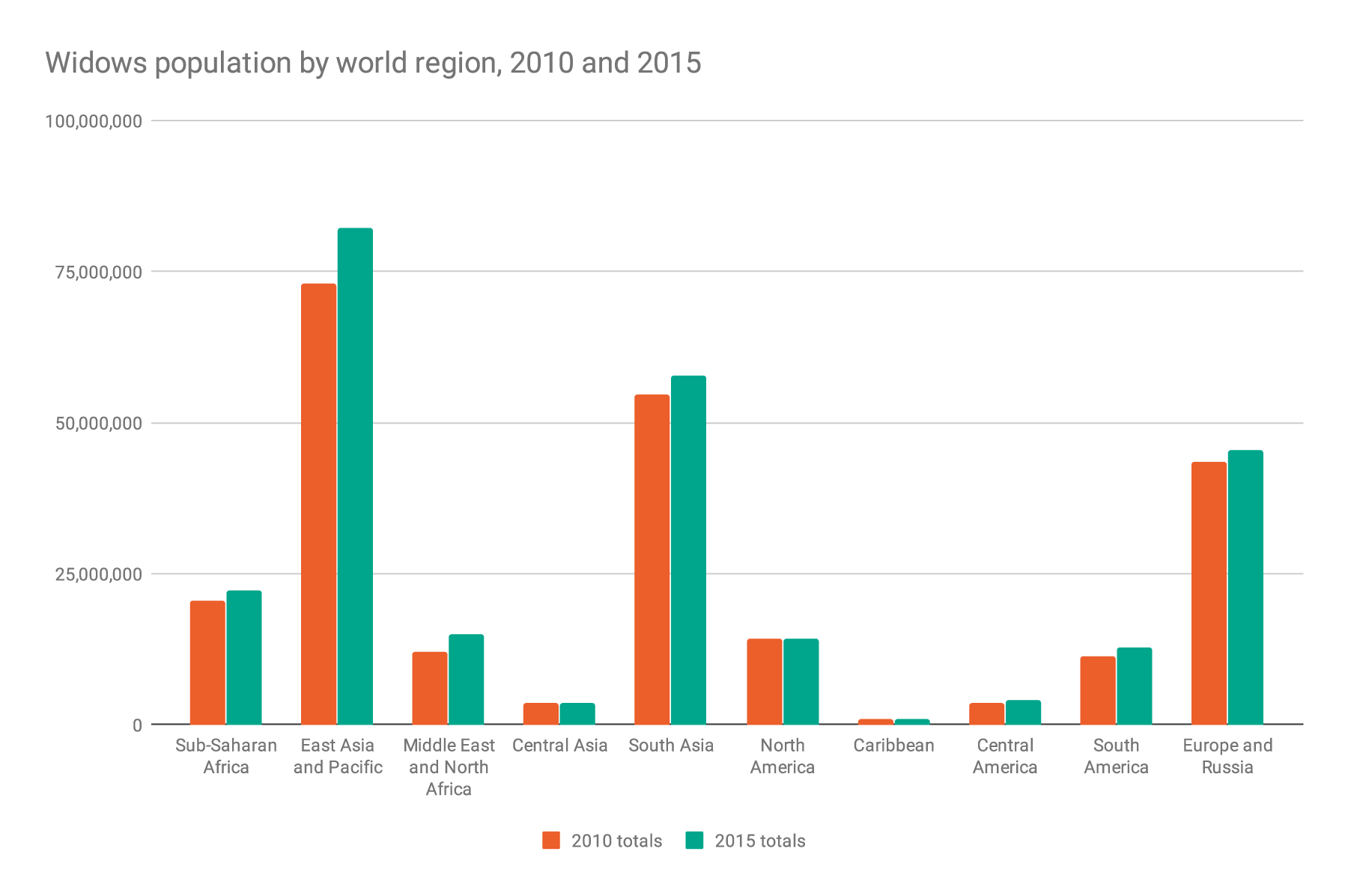 All regions of the world showed an increase in the number of widows. The Middle East and North Africa showed the largest change, with a 24.3 percent increase. The region with the smallest change was North America, with only a 0.5 percent increase. The least developed regions of South Asia and Sub-Saharan Africa showed percentage changes at half those of the Caribbean, Central America, South America and East Asia and Pacific, likely due to the steadily improving life expectancy of women in these areas. The region with the highest number of widows was East Asia and Pacific, followed by South Asia and Europe/Russia in that order. All other regions have significantly smaller numbers of widows than these three. The South Asia share is significant because of the high level of extreme poverty in this region, while Sub-Saharan Africa has a higher percentage of extreme poverty but a much lower global share of widows.

The regional percentage of the global total number of widows in 2015 shows that the same three regions represent, in the same order, the largest percentage shares of widows. East Asia and Pacific represents 31.8 percent of the total, with 22.4 percent in South Asia and 17.6 percent in Europe and Russia. These shares show marginal decreases against the adjusted 2010 figures, while the Middle East and North Africa, Central America, and South America all marginally increased their global shares of widows. The Caribbean was unchanged.

A notable statistic is that China and India together account for 35.2 percent of the total number widows worldwide in 2015, according to these estimates. Of the two countries, India is of greater concern than China as regards widows’ well-being, since the education levels of the mass of the population is much lower, extreme poverty is deeper and more widespread, as illustrated by widespread severe malnutrition in the state of Madhya Pradesh, where poverty is driven by poor sanitation, insufficient water resources, low employment and a potentially expanding HIV epidemic.

Table 3.5 provides data on widows’ children by region and globally, compared with the adjusted 2010 data.

The estimates show that the only regions where the numbers of widows’ children fell were South Asia and North America. All other regions showed increases, the largest increase in East Asia and Pacific, followed closely by the Middle East and North Africa. Sub-Saharan Africa showed only a small rise, while globally, the number of widows’ children grew by an estimated 5.7 percent over the period. Globally, birth rates are falling across all regions based on analysis of the Total Fertility Rate (TFR).

Due to the difficulty in precisely estimating numbers of widows’ children, these estimates are based on the total fertility rate multiplied by the total number of widows region by region. Given that older and elderly widows make up the largest share of widows in all countries, the definition of widows’ children used for this data is children both under and over 18 years of age, so including widows’ children who are now adults. This is relevant because it shows the scale of individuals directly affected by this issue, including the impact of discrimination, poverty and other severe deprivation on the whole family.

Table 3.6 shows all countries with one million or more widows in their female populations. It also presents the most recent data on the percentage of widowed females in the marital age female population for each country. Different lower age limits for marriage are shown in the census and survey data by country: the ranges used are: 10+, 12+, 14+, 15+, 16+ and 18+. A standard age of 15+ is being adopted more and more and represents a statistical convention only, not social practice on marriage or legal minimum age of marriage: population data are ordered by five year age cohorts from 0-4, 5-9, 10-14, 15-19, 20-24 etc.

Table 3.7 shows the 2015 ranking of countries with the highest percentage of widows in their female marital age population. Widows make up 10 percent or more of the female marital age population in 58 countries. Afghanistan, as in 2010, remains the country with the highest percentage of widows, although the data for Afghanistan is highly speculative and not used here with a high degree of confidence. Countries with data that likely under-represents the true number of widows are Iraq and Syria, due to the fact that their last available data predates the 2003-13 conflict period, and the present civil war respectively. Our previous report on widows erroneously reported a higher percentage of widows at around 27 percent; the current percentage of 21.3 percent is correct based on the available data. In the present reporting period, Afghanistan at 21.3 percent is followed closely by Ukraine with 19.2 percent.

The important feature of this data is that countries with a high percentage of widows in their female marital age populations are almost entirely high and medium, not low income countries. This is due to a combination of factors: life expectancy, participation in the Second World War (specifically in Europe, Russia, North America and East Asia), social norms around remarriage, and state welfare provision. By contrast, countries with high rates of poverty, lower life expectancy and strong social norms  favouring remarriage have lower percentages of widows in their female marital age population. Note however these factors do not hold for all countries: South Asian countries have high poverty rates, but remarriage by widows is low. 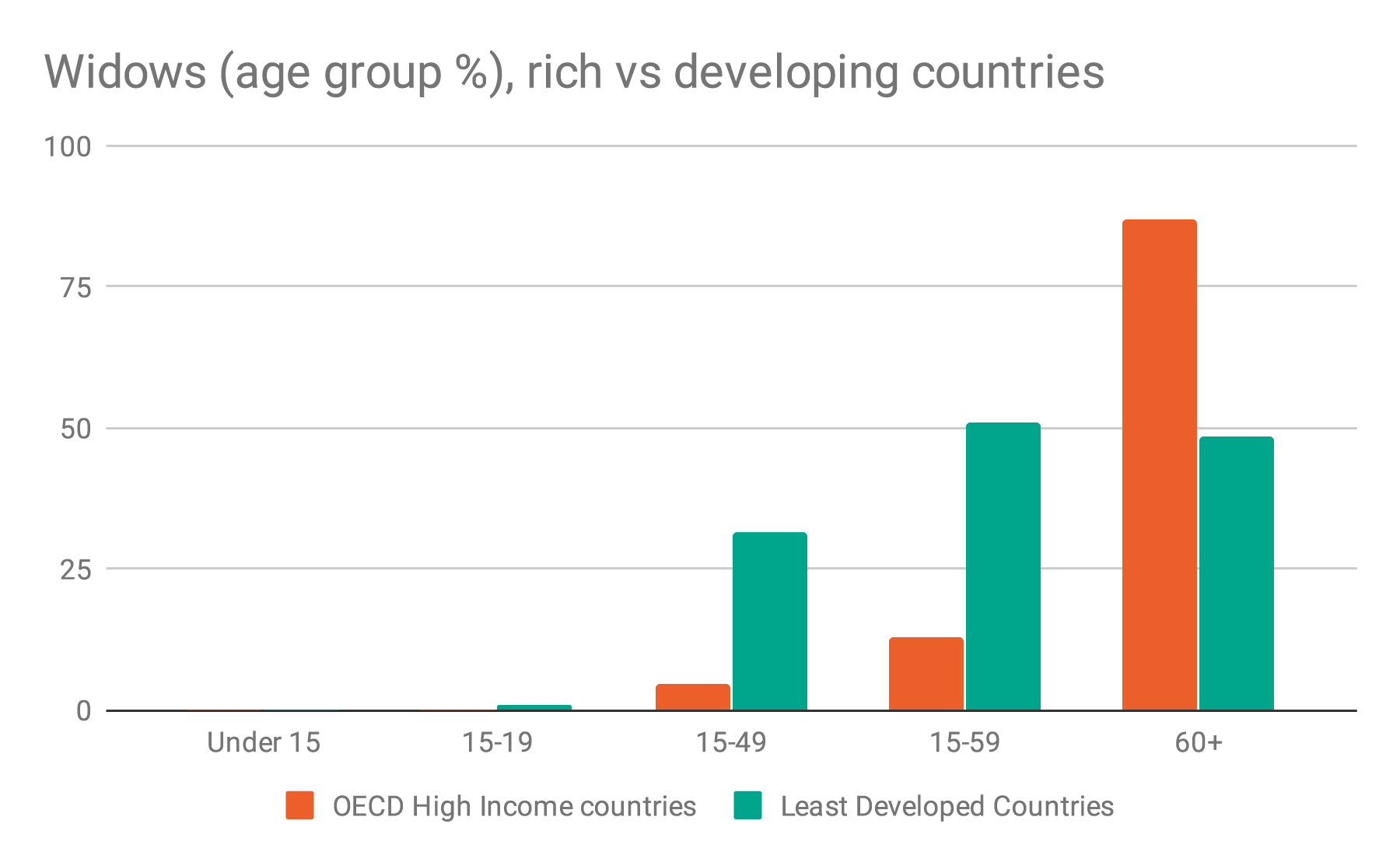 Table 3.8 shows the most valuable 2010 information about widows from a policy perspective – Table 3.3 in the 2010 Study (The Loomba Foundation 2011). The cohort analysis shows the percentage of widows by age range. While small in percentage terms, child widowhood still persists because child marriage remains common in certain regions. In India, the state of Rajasthan is regularly in the news with reports of child marriages, many under the age of ten. Very early marriage is reported in part of the state of Uttar Pradesh from between the ages of two and four years. Under-age marriage occurs in many other parts of India, more commonly in the female age range 12-16. Table 3.8 shows that child marriages and child widowhood also occur in Europe.

Other significant features of Table 3.8 are comparisons of widows in the child-bearing age range 15-49, between Sub-Saharan African HIV/AIDS crisis countries and non-crisis ones, and between Europe (including Russia) and North America.

From the point of view of policy and prioritising action on widows’ deprivation, Table 3.8 significantly reveals that the Least Developed Countries (LDCs) category, defined by the UN as the 49 poorest or most underdeveloped countries, have the largest proportions of widows of child bearing age (over 31 percent). Widows under age 60 (in fact more are under than over 60, unlike the rest of the world) and widows in all age groups, with the exception of South Asia.